On Saturday June 27, within the framework of the World Social Forum of Transformative Economies in Barcelona, which was finally held online, a group of people met at the Confluence of the Commons meeting online. In this article we explain the content of the session and how it was developed, and the process we followed to be able to document and collect the knowledge generated in the four languages we used.

We had been preparing our participation in the WSFTE for a year, when the pandemic arrived, so we rethought how we could continue working telematically. We planned to do thematic work, in chapters, to produce resources together and to start a process of joint reflection. We wanted to make the fundamental challenges visible and build a process of related encounters between them.

The first part of the meeting was devoted to defining its objective, and from there came ideas such as a commons vision to be more clear, find new people to collaborate with in commoning, identify new commoners’ organisations around the world , sharing perspectives, getting to know each-other better, have a list of topics to discuss in future meetings, have collected examples of projects and practices of the commons as well as organisations related to commons models, both in the sense of supporters and facilitators or as adversaries of it, find ways to collaborate, breaking out of the academic/western-centric “commons ghetto” for a more pluriversal approach and deeper complementarity with other post-capitalist movements. …

We talked about the need to define the commons that we want to defend or create, and to do so through concrete practices, critical dialogue, collective construction, with licenses and open contents to unite production and tools, being able to get out of our networks, movements and environments.

We split up into language groups. In Italian we talked about the urban environment and the natural commons, the importance of a common work between activists and researchers, and of reinforcing the work being done, not only at the municipal level, but also at the state and European levels to be able to influence legislation. In Spanish, the documentation of the processes and meetings and the strategies to enter into dialogue with other confluences were discussed. In French, the conversation was centred on living, in two senses, living somewhere and being inhabited by something; on the relationship between the commons and the right to the city, with the social economy, and on the need to continue to see how the actions of the collective can be connected with each other. In English it was stressed that the commons is part of our lives, of the need to move away from the idea of private property and rediscover what we need to learn from the commons, and of the danger that we ourselves, when we speak of the commons from a distance, are gentrifying it, are re-appropriating it.

After sharing among groups, we continued the session with a round of interventions in which we talked about projects, ideas, campaign themes, proposals that we thought it was relevant to share in the context, and a lot of them came out, some of them already underway and others still in the realm of ideas.

The last part focused on how each one of us wants to contribute to the Common Horizons process:

The tools we used

We followed a structured pad, with a meeting plan which we have previously translated into different languages, using colours to differentiate between them.

We made sure there were enough facilitators who committed to take notes from and into the four languages spoken, so everyone would understand what was being said and could contribute to the conversation (out-loud or in writing). https://pad.femprocomuns.cat/p/CommonsConvergenceMeetingJune27

The notes taken on the pad and the metadata collected (organisations, projects, people mentioned and involved ,…and other inputs) were then automatically transferred, by a bot, into a semantic media wiki (Teixidora). This allowed to map subjects covered, relationships among them, among individuals and among organisations, etc.

We also used the video conference tool, based on BigBlueButton, and developed on meet.coop (a project then still under construction).

We used different meet.coop rooms for simultaneous translation offered by WSFTE. All participants were continuously ‘in’ the main room (where they could hear what was being said in the speakers chosen language.

Participants could also, if they choose, open a second tab on their browser and access a “translation” room where they could hear the translation into their chosen language (Spanish, English, French, Italian).

It was proven not difficult, as long as participants accessed the meeting with a good internet connection, on a laptop, and with the intention to work, and because there were a few facilitators who understood the process and made sure everyone understood it too.

The metadata from the session were collected at Teixidora, where they joined the projects, organisations and individuals mentioned in the Commons Camp processes in Marseille in January this year. 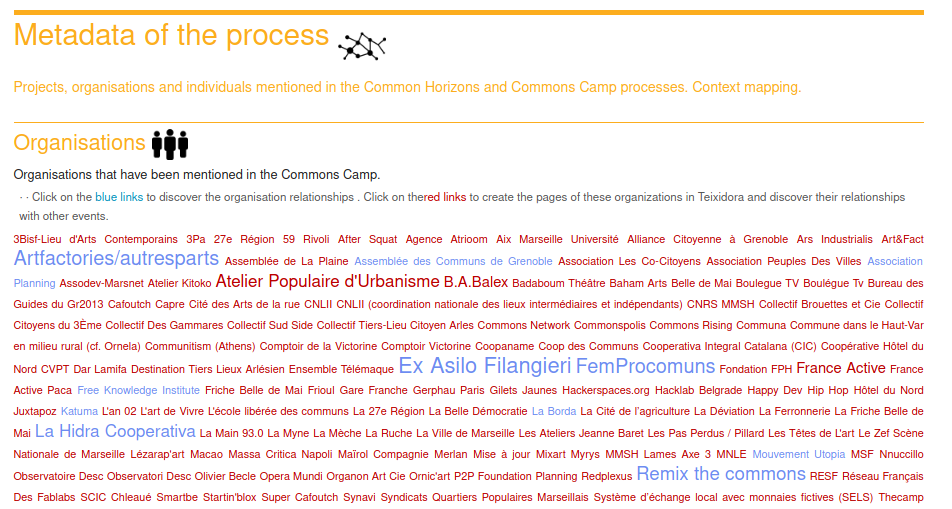